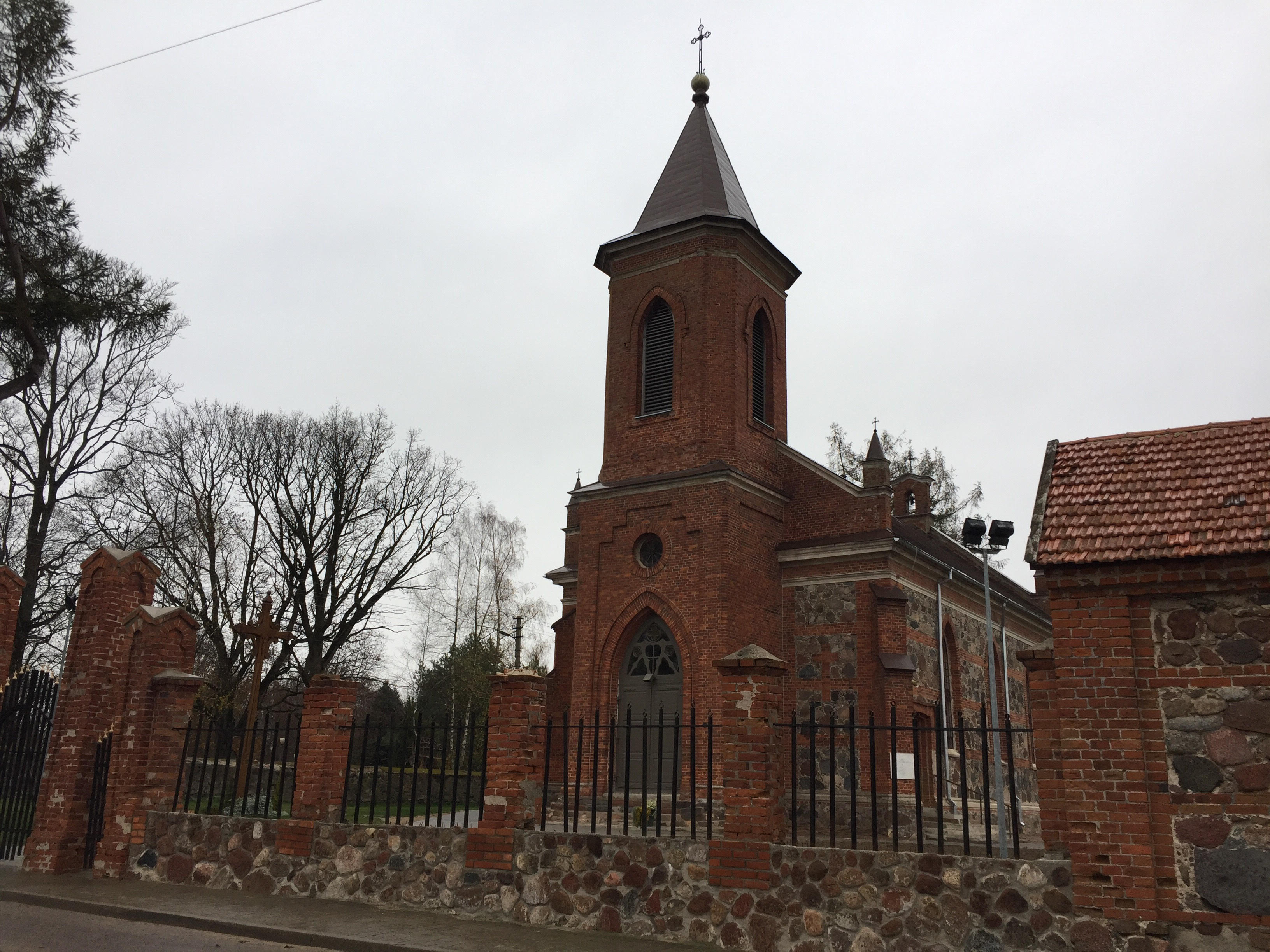 Built in 1865, the church has a rectangular plan, single-sided, with low three-sided furnishings and side furnishings. The churchyard‘s fence is metal, its plinth is stone masonry, the pillars are made of brick. The main interest of the complex is the church, which is oriented with a side façade to Varpo Street, stands in the central part of the territory, slightly to the east side. In the corners of the churchyard there are one-story almost square plan stones – brick masonry chapels. The composition of the ensemble is central, the style is neo-gothic. 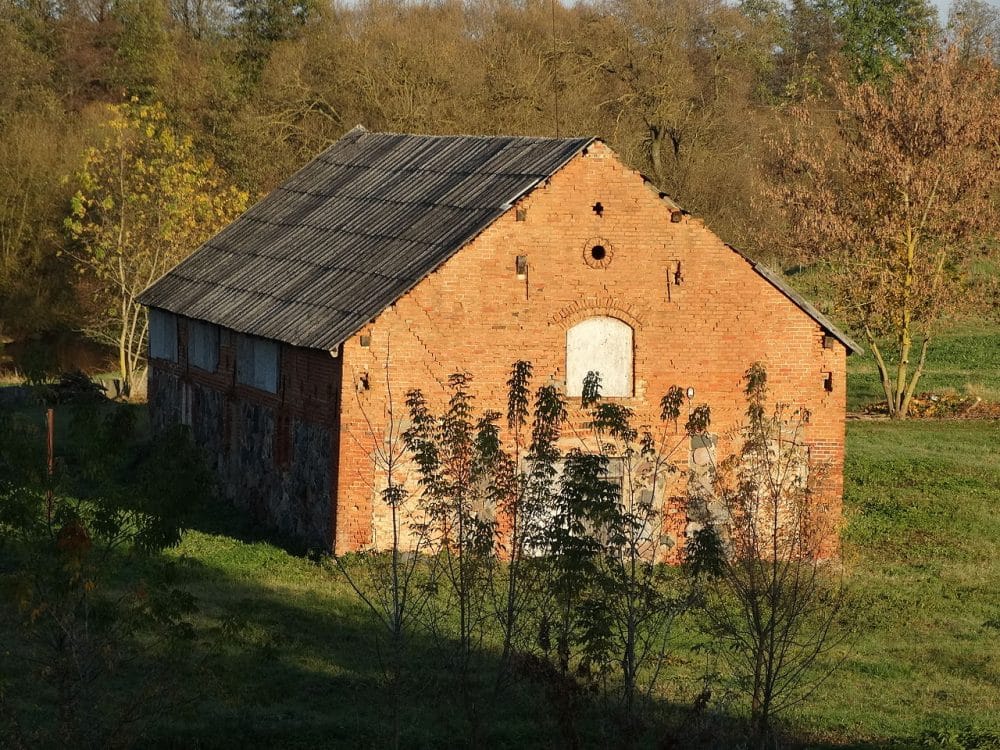 A valuable feature of Bukta manor is the structure of the plan of the manor house, the volumetric spatial composition, the remains of the former parts (structures) of the complex or their places. It is claimed that in ancient times the royal forests were raw here. For the first time, the manor was mentioned in documents from 1520 to 1525. There is the river Šešupė nearby, on the left bank of which in the 16th century a habitat was built for the stay of hunters and representatives of the Grand Duke. In 1569, the Grand Duke of Lithuania and king of Poland Žygimantas Augustas transferred these lands, about 17 valaks, to Lukas Volfas. In 1649 it was a forest manor with no farmland and no penal. 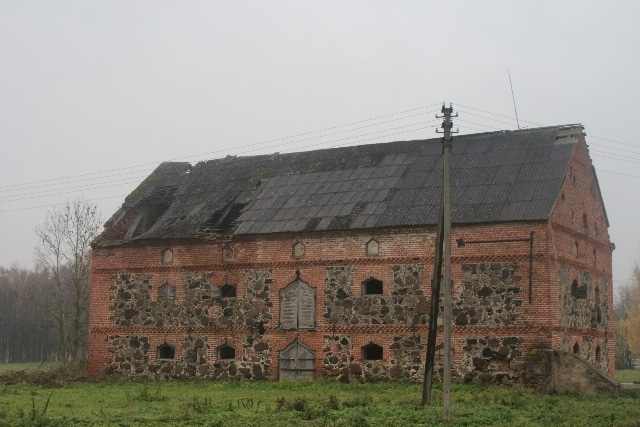 Ivoniškis (Gudeliai) manor has been known since the 16th century, when Gudeliai and the surrounding villages belonged to counts Tiškevičiai. Around 1700 Count Tiškevičius built a chapel near the manor, strengthening the religious influence of the manor on the surrounding area. It is believed that the chapel and manor house of that time burned down around 1803. Since the second half of the 19th century, Gudeliai belonged to Ivoniškis Manor. The manor had five taverns, a spirits brewery (bravor) and many other outbuildings. In the interwar period, the palace was still relatively well-maintained. After the Second World War, a gymnasium was established there, later a seven-year-old school. In 1968, the palace was demolished, and in other buildings a collective farm office was established.

The tomb of Tomas Ferdinandas Žilinskas is located in the graveyard of Šunskai. The teacher, cultural figure, distributor of the prohibited Lithuanian press, together with other educators, prepared about 700 students over 37 years. According to J. Jablonskis, T. Žilinskas was "The great patriarch of Lithuanian teachers, a teacher who taught to work in his country in the most difficult circumstances". Born in 1840, in Domeikai village, he died in 1925. 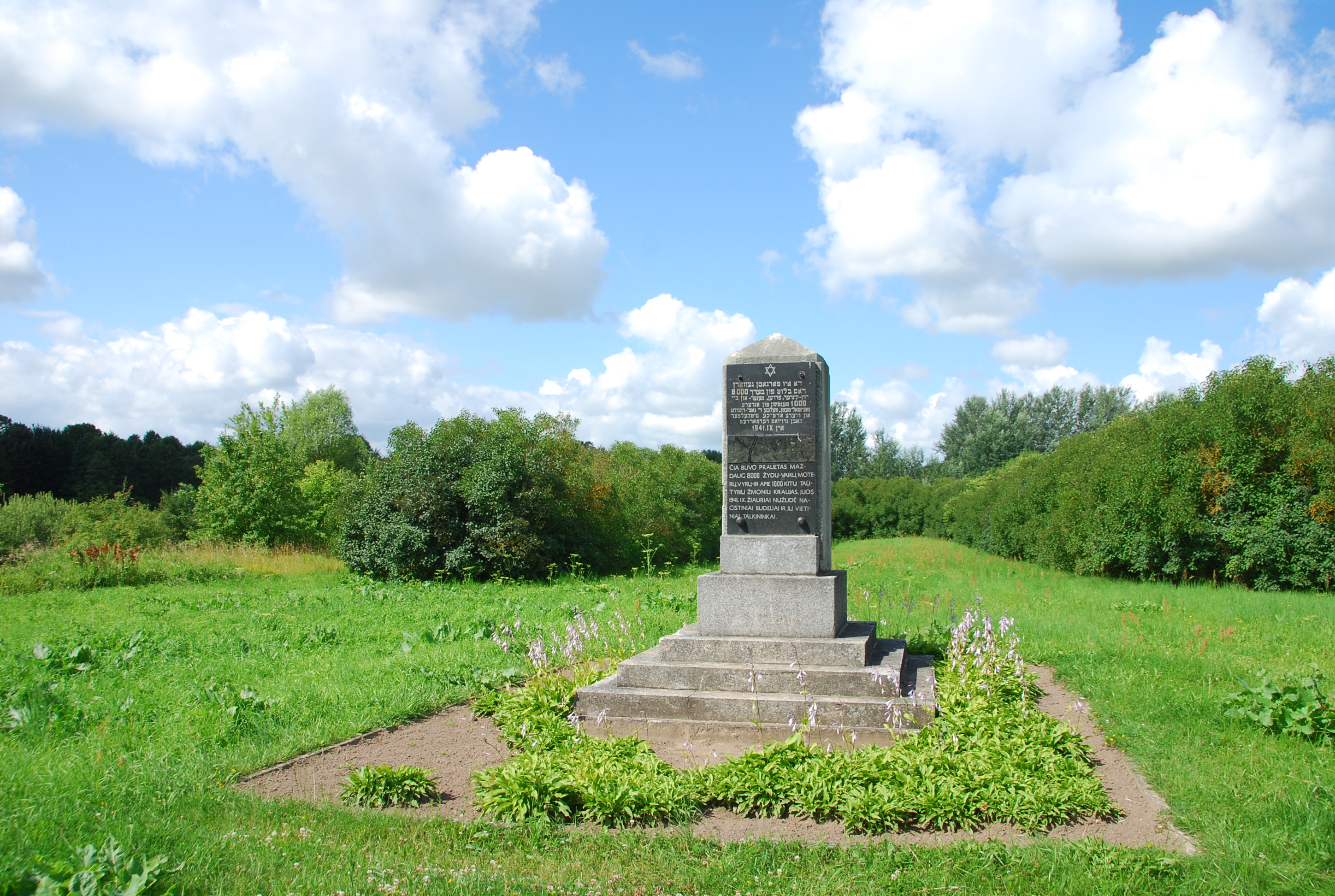 When the war between Germany and the Soviet Union began in 1941, the first 32 Jews of Marijampolė were killed in Marijampolė on July 7, and on July 18, another 53 were killed. That was just the beginning. On September 1, 1941, more than six thousand people were killed in the barracks shooting range, including almost all Marijampopolė Jews. The massacre was carried out by the "flying squad" of Joachim Hammann, which was based on the Lithuanian National Labour Protection Battalion, or rather, the 3rd Staple. In Marijampolė, the massacre of Jews took place in the territory of the city, so the whole Marijampolė heard gunshots and screams of victims. Part of our city was buried here. 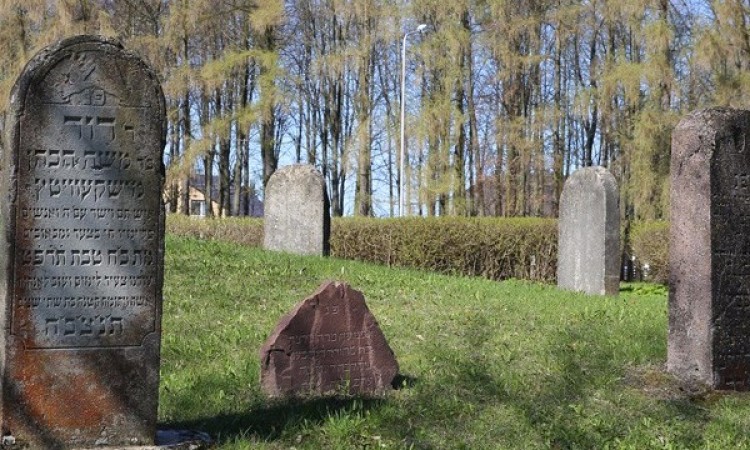 Jews were buried in the new Jewish cemetery between 1918 and 1940. It was not until 1992 that they were renewed. Eleven stone tombstones were discovered during the management of the cemetery. Ten of them were lined up in a circle, which probably symbolized the minjan, which portrayed in the Jewish religion that a number of ten adult men had to pray together. One tombstone was left behind, at the site of its discovery. The foundations of the fence of these cemeteries are also preserved. 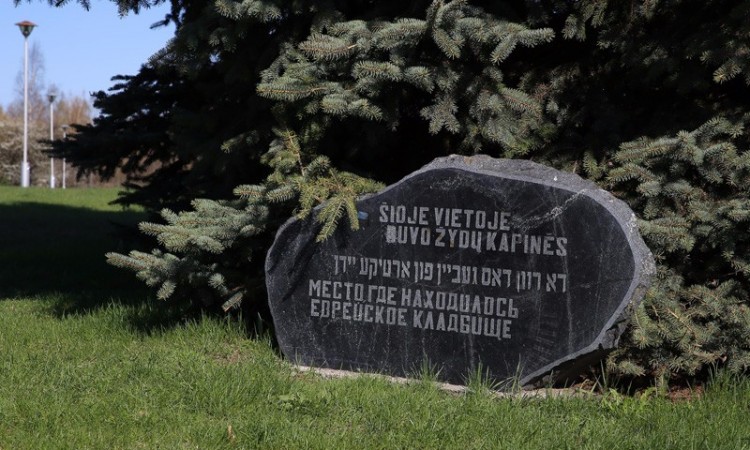 The old Jewish cemetery was established in the second half of the 18th century. Here, the first Rabbi of Marijampole, Haim Perelmuter Sheršover rests, who built the first wooden synagogue in our city around 1825. The cemetery was destroyed during the Soviet occupation. In 1991, a monumental stone was erected on the territory of the former cemetery. 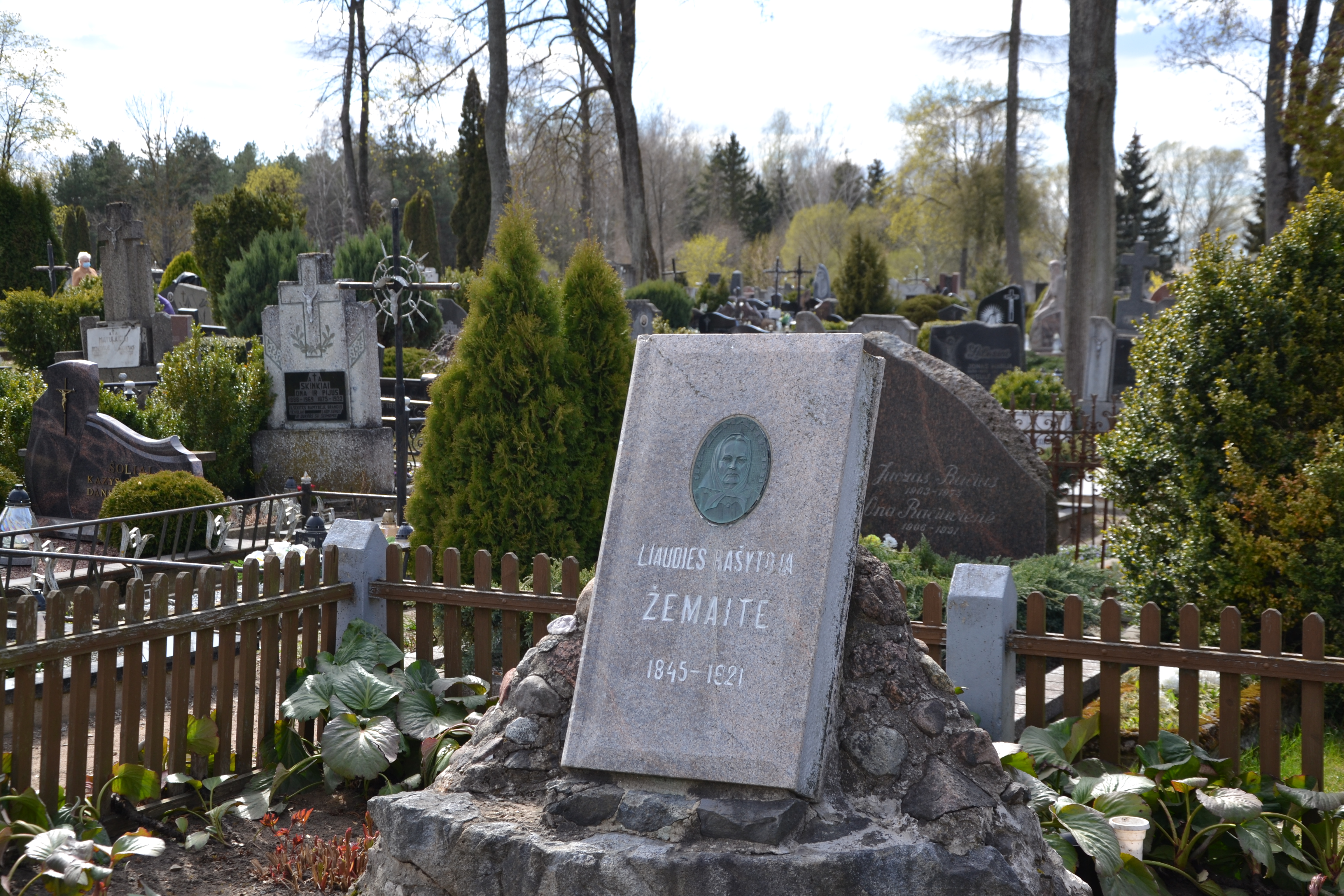 The remains of the teacher, poet and translator, Lithuanian press distributor Petras Arminas–Trupinėlis‘s rest in Marijampole's old cemetery, alongside the kens (symbolic tombs) of the famous teacher, book spreader Petras Kriaučiūnas and the author of the first Lithuanian historical novel Algimantas, Vincas Pietaris. In this cemetery, near the central trail there is the tomb of the writer Žematė, Rimantas Juknevičius, who died on January 13, 1991. There is also Marijonai tomb in the old Marijampolė cemetery in the middle of Marijampolė Old Cemetery, on the right of the central path – The Marion Congregation of St. Peter's Square in Lithuania. Tombs of monks, the first members of the renewed monastic church such as J. Totoraitis, priests V. Dvaranauskas, J. Navickas, J. Kazak and many other priests and brothers Marions rest there. 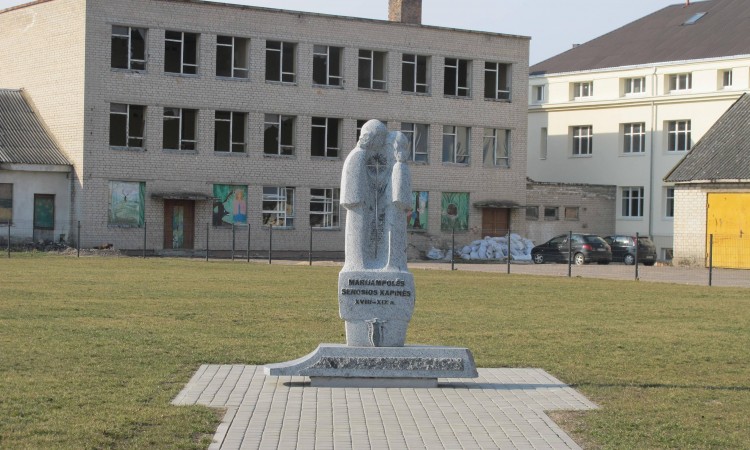 When the noble Butleriai, with the help of the Marian monks, began to build a new town in Marijampole, they realized that there must be a cemetery in it. The privilege given by the nobles in 1758 states that the Marians must establish a cemetery in the territory, between Šešupė and the orchards. It was a place both close to the church and together outside the town. The cemetery was close to Ražančkelis, which connected the Kvietiškis manor managed by Butleris and the Marijampolė church. These cemeteries are also depicted on maps made by the Prussians in the early 19th century. About a hundred men who died in the 1831 uprising lay in the cemetery.  Because the plot of land was small and there was almost no spot, the cemetery was closed in 1850. During the press ban, book spreaders visited this place at night. On May 28, 1905, the first Lithuanian public performance "Amerika pirtyje" in Sūduva was performed in a large wooden club in the north-eastern corner of this territory (now on the northern side of Alyvų Street). After the restoration of Lithuania's independence, the fate of the cemetery was unknown and the place was included in the list of heritage monuments to be protected by the state. On October 9, 2014, a monument created by the sculptor Julius Narušis was unveiled in the cemetery center. 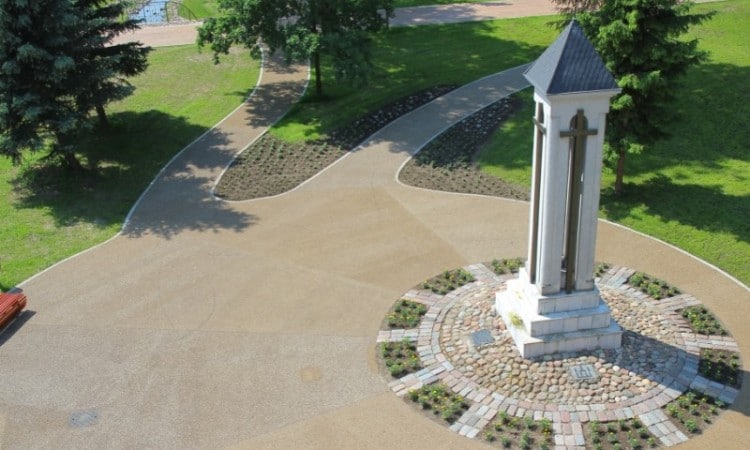 In Vytautas the Great Park in 1991 June 14 the Chapel of Suffering  was unveiled. An inscription is inscribed at the foot of the chapel, “We were robbed of blood by our native stump. Our wounds were made with forged shoes. A. Miškinis. 1940-1955." The construction of the chapel was initiated by the Marijampolė branch of the Lithuanian Union of Political Prisoners in Deportation (LPKTS MS), designed by architect Zenonas Galadauskas.  The location for the construction of the chapel was chosen not by chance. It stands between the building of the Vilkaviškis diocese curia (P. Kriaučiūno str. 17) and V. Bagdonas‘ house (Vytauto str. 26). Victims of the NKGB, NKVD and Gestapo were tortured here. The buildings were equipped with interrogation rooms and prison cells, where Lithuanian freedom fighters and civilians were interrogated, tortured and killed. The tortured and murdered were buried right here in the park.