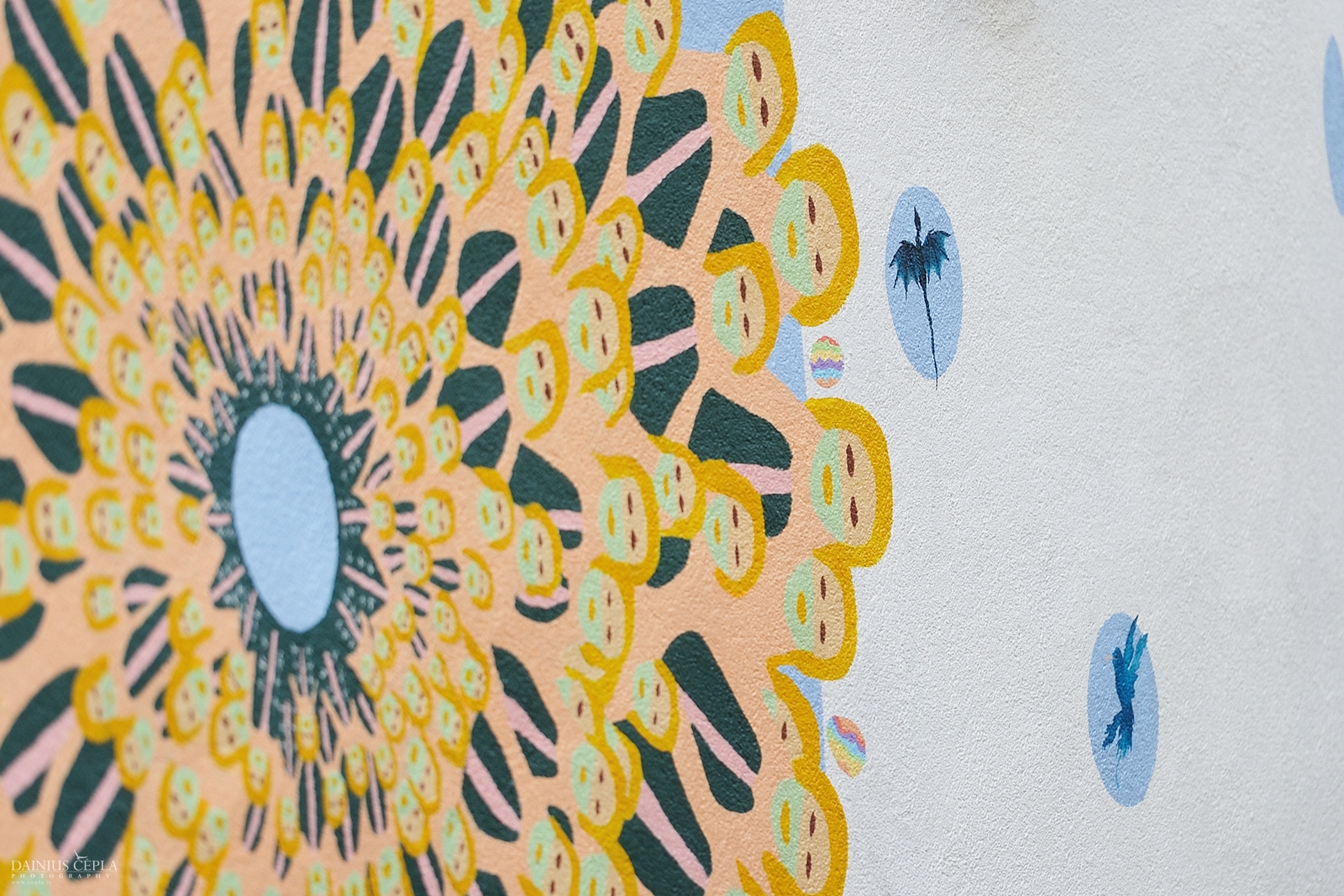 The artist was inspired by the stories of the characters of the book „Dreams of a little frog“ and by personal recollections about forefathers coming from Lithuania and Poland who were the story-tellers of her childhood. The artist drew a sunflower on the wall of the building. The story- teller in the book „Dreams of a little frog“ gives dreams to a little frog. In one of the stories the little frog has to give away his heart to death. When that happens, the dream comes true and the story-teller divides herself into many story-tellers like seeds in a sunflower. This marvellous blossom symbolizes each of us individually as if we are story-tellers of our stories. The seeds in the blossom are our dreams which disappear after becoming true. With the help of young volunteers in Marijampole, this painting beautifies the souls of the artist‘s forefathers, their native roots while seeds in the sunflower are all people creating the world with their own stories. 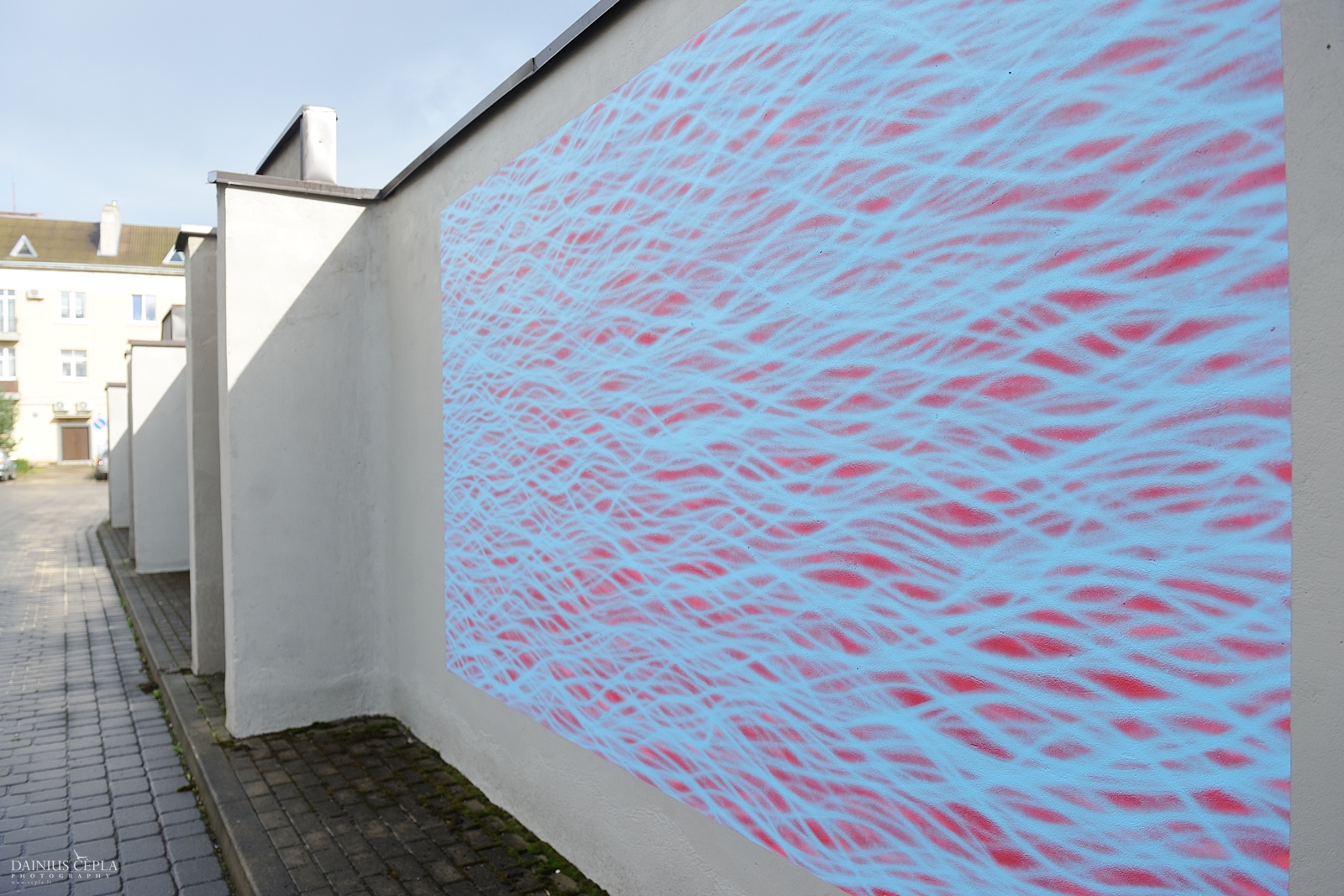 The flowering fence symbolizes Lithuanian folk saying „fences start flowering in a native country“. It is a distinct reaction to the consequences of the pandemic leading to inability to return to a native country and remain missing one‘s homes and close people. An architectural barrier is a fence. It a window to other people living somewhere else while the flowering of the fence is the expression of nostalgija reflecting the feelings of people who are unable to return home. 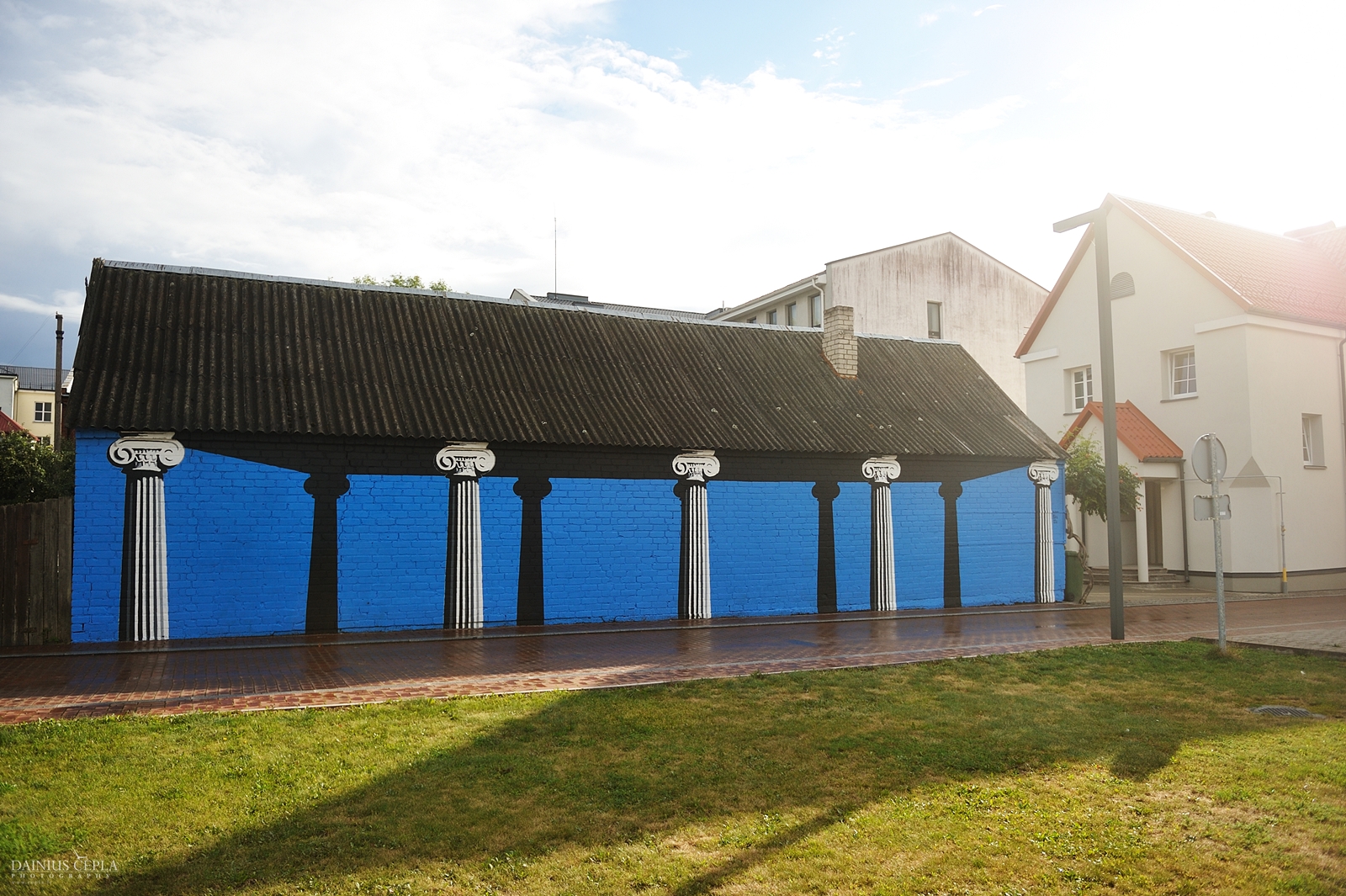 The motive of Greece pantheon gives the feeling of strength and stability to this wall, especially it is symbolic during the world pandemic giving a chance to travel but only in everyone‘s mind. Take a bag and come here with your family, friends or relatives, have a picnic and feel yourself as if you were in majestic Greece. 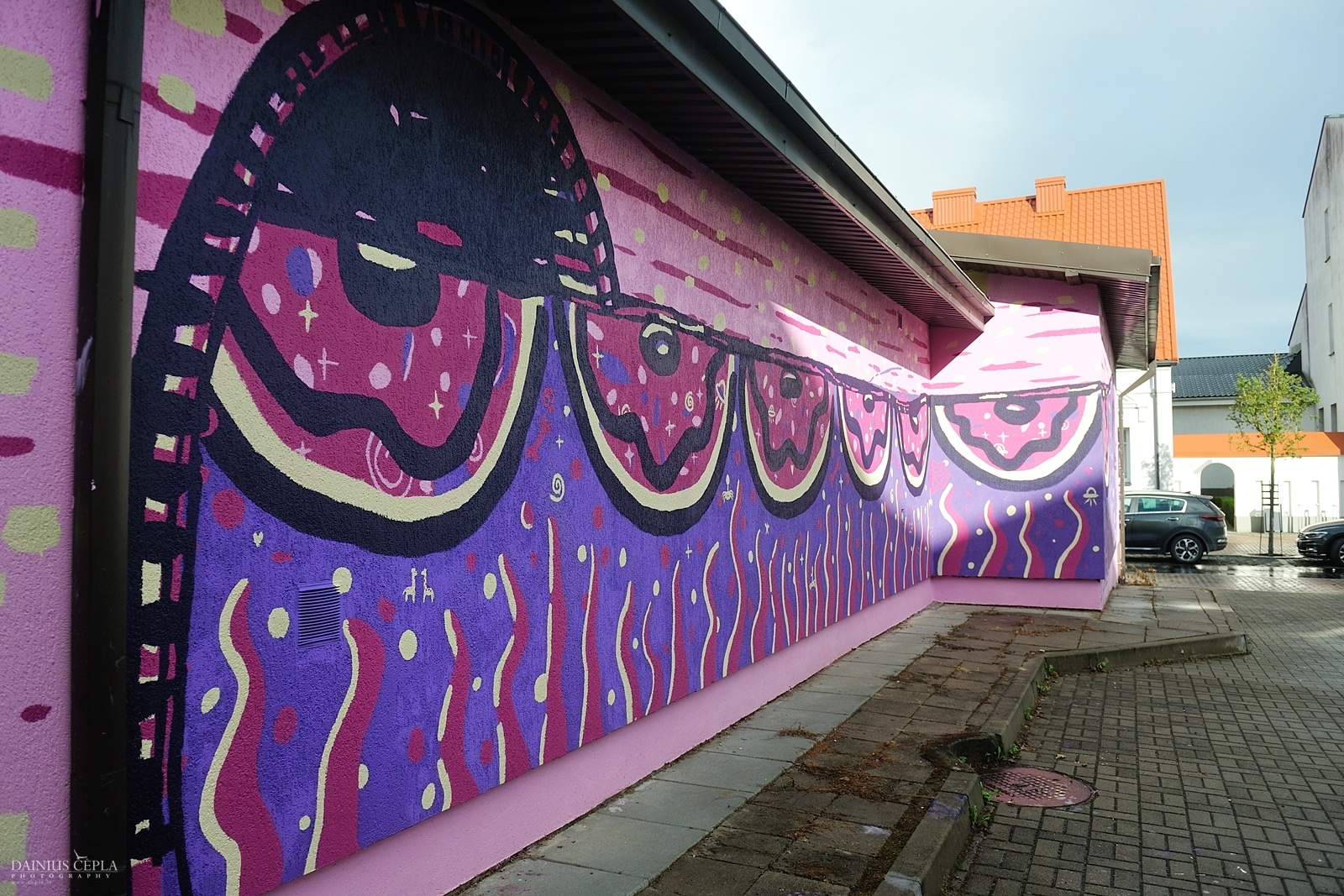 The snake of doughnuts crawled even 7195 km from Cleveland, Ohio city (USA). In this way it connected Marijampole with the native country of the artists. Doughnuts reflect the patterns of the snake skin and perfectly flow into the indstrial life of the town because of locally made and worldwide known doughnuts. The artists hope that everyone after having seen this painting, will smile, buy a doughnut and that will brighten his/her day. According to the artists, the mission of the doughnut snake is to make everyone smile and feel happy after seeing it. 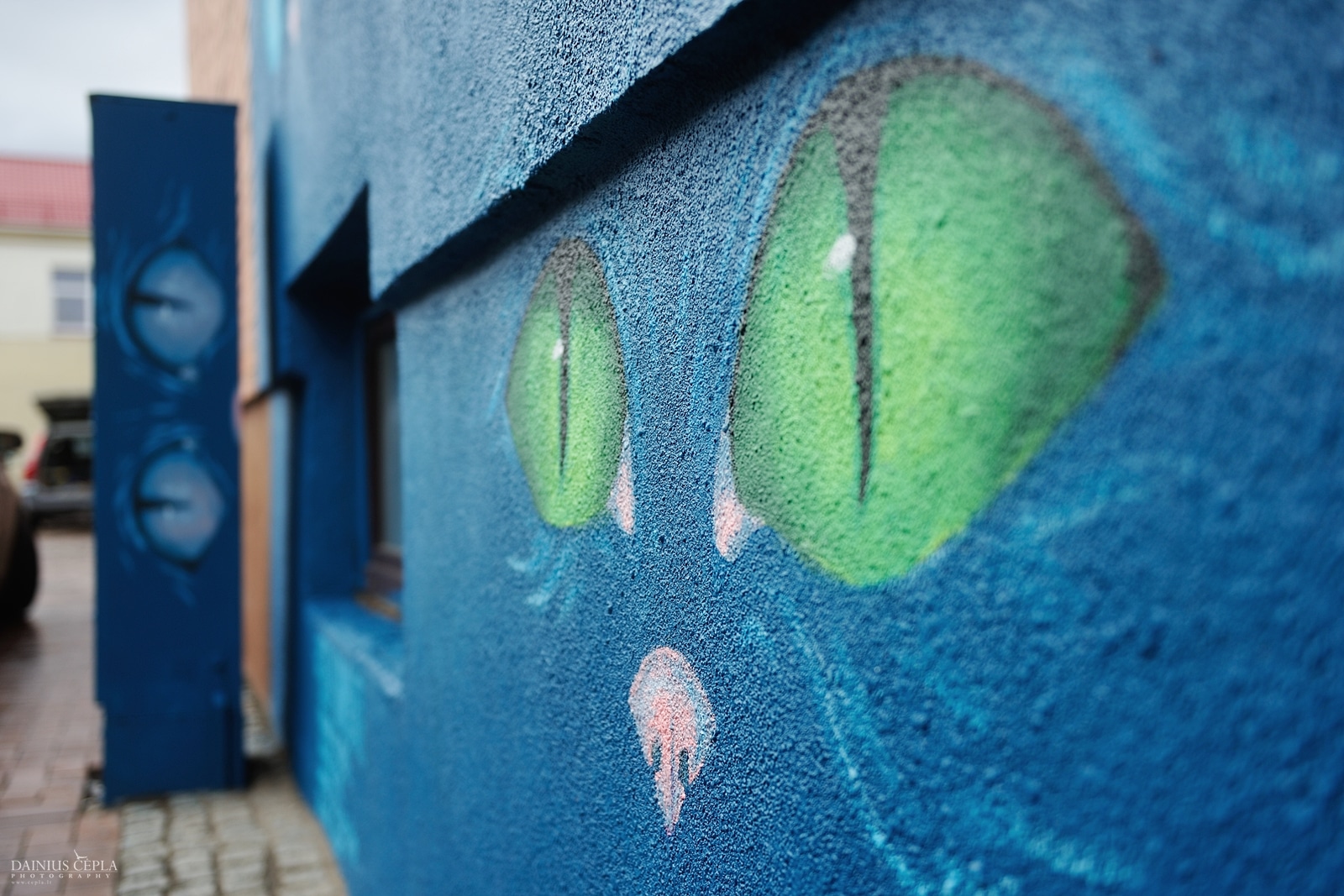 Sometimes people behave like cats which attentively watch their prey and wait for its fatal mistake in order to attack and eat it. People also wait for other people‘s decline with the intention to attack them, condemn them. The picture depicts the eyes of the cat which symbolize the behaviour and reflection of people who scored high in their lives but once they stumbled. 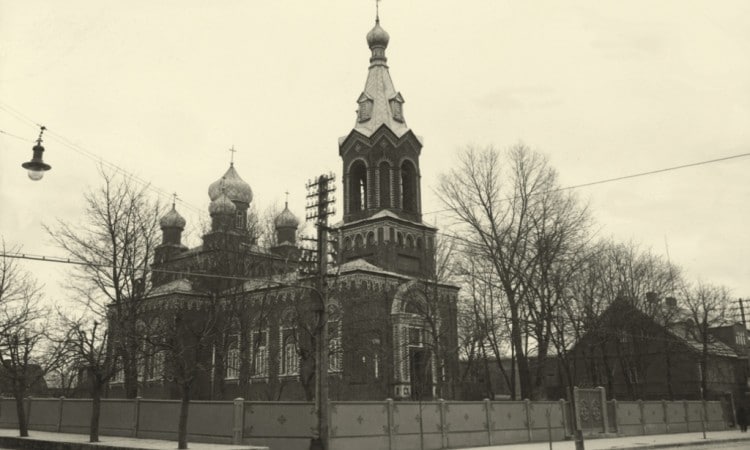 This temple is associated with the miracle of Augustavas or the miracle of God‘s mother. When the first world war broke out after the first victories, the Dizzying Russian army from East Prussia was pushed back by the Germans and the Tsarist army fell into the woods of Augustavas. On September 1, 1914 (according to the old calendar), at about 11 o'clock in the evening, soldiers of the Kirasyr squad, upon hearing the movement of enemies nearby, kneeled on their knees and began to pray. Some time later, the gulls saw a bright star in the sky, which turned into a swarm of small stars from which the Mother of God appeared with the baby on her hands. She showed the direction west by hand. This view remained in the sky for half an hour, then the remote warriors successfully retreated from the surroundings. This miracle was also seen by the nearby Don Cossack Squad. After September, the first German attack on the entire front suppressed... The Holy Synod of Russia, having studied this event in 1916, recognized it as a miracle. 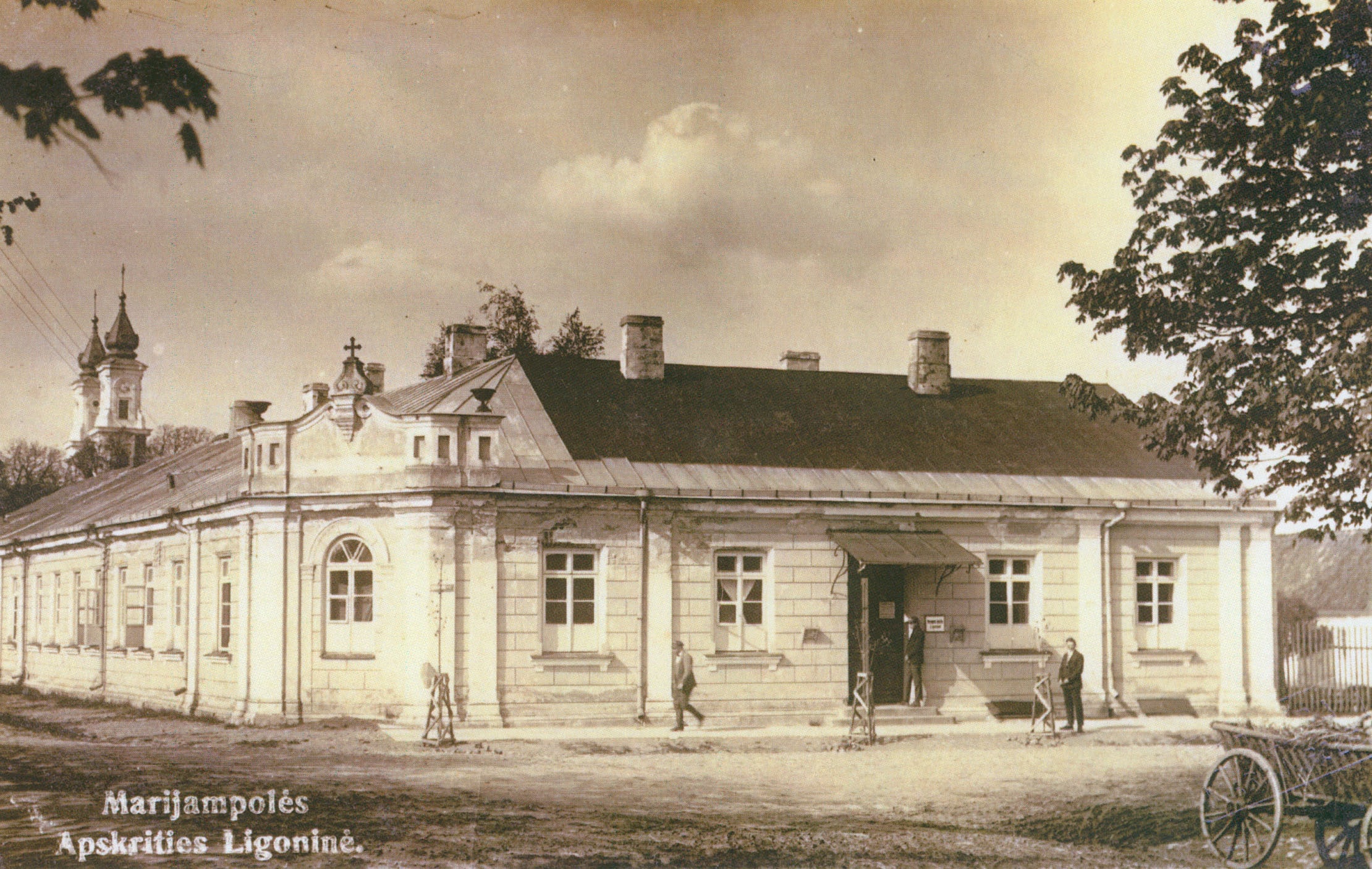 It is the oldest brick building in Marijampolė. The old Marijampolė Hospital was built when Užnemunė and our city went to Prussia. The hospital had 30 beds for patients. President Kazys Grinius wrote in his memoirs the following story of the appearance of this hospital, "The Queen of The Prussians who visited Marijampolė, a very good woman, she met two impoverished, frozen children in the city who asked for begging. - Why don't you go to school, why don't you treat scabs? " the Queen asked. The children replied that neither the school nor the doctor were there. The Queen then ordered to establish both a school and hospital in the city." The good woman whom the prussians considered a saint was Queen Luiza, the wife of King Frydrichas Vilhelmas III of Prussia, who ruled from 1797 to 1840. 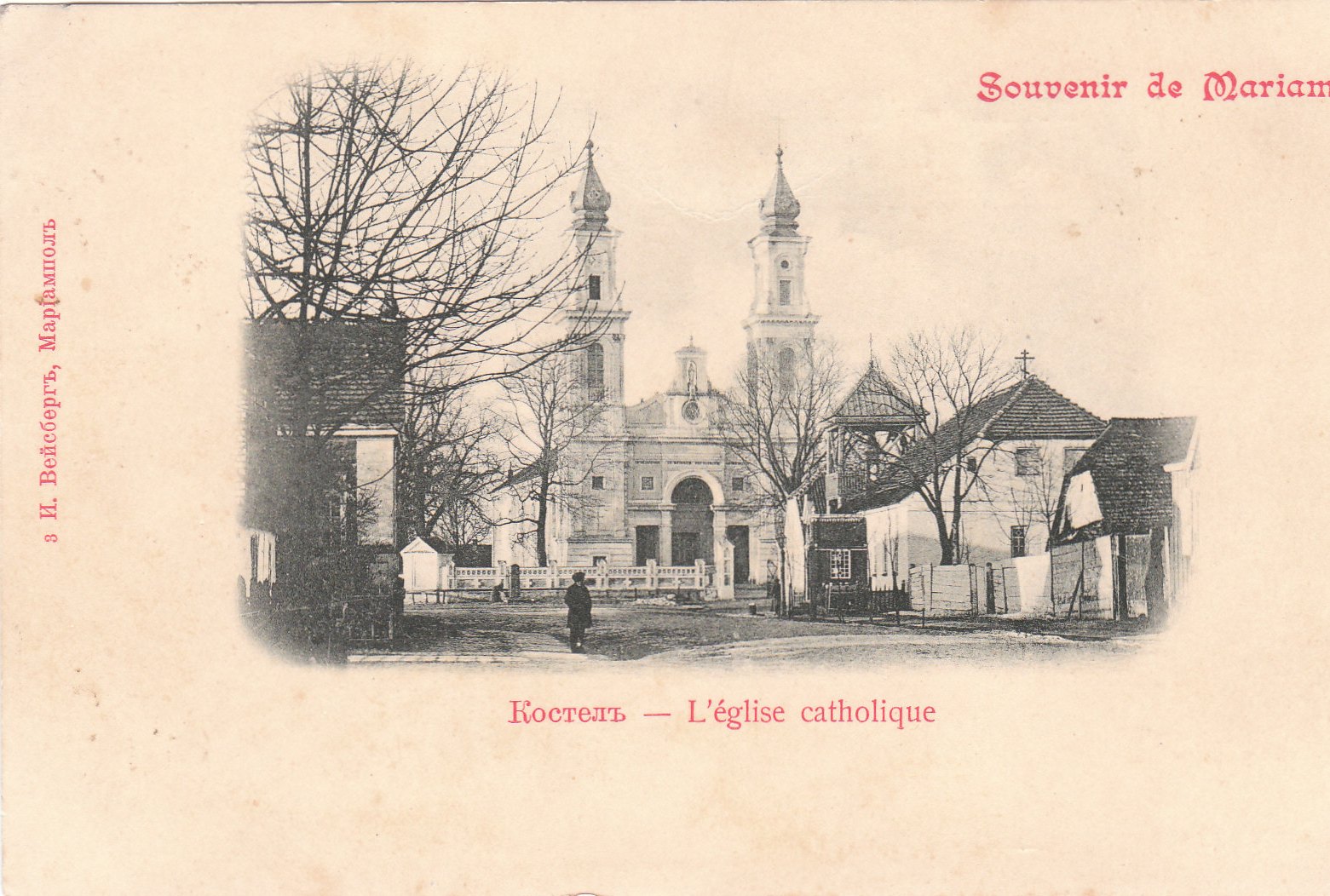 In 1739, counts Markas Antonijus ir Pranciška Butleriai founded the city of Starapolė on the site of the former village of Stara Būda. In 1750, he invited the marion monks to settle near the town and built a wooden church and monastery for them. The new city was named Marijampolė – the city of Marion. People tell a beautiful legend of how Countess Pranciška chose a place for the church. She walked out of the Kvietiškis manor and was praying as she was walking. The Countess finished her pray  and she said at the end, "There will be a church here." A church was built on that site.

The house on the corner of P. Butlerienė and Laisvės streets was built in interwar Lithuania. A merchant of beer and other alcoholic beverages settled there. Advertisements adorning the façade of the building – bottles, according to the locals, determined the fate of this house. After the second world war, a "šnapsinė" settled here, and the grandma who lived in the house traded in a homemade one. This advertisement is the only one that has survived in Marijampolė since the beginning of the 20th century.

A beautiful legend is told that while celebrating Purim (Spring Festival), the Jewish community of Marijampolė collected food for the poor. Everyone contributed as much as they could, only one rich Jew refused to donate to the needy. Then the committee for collecting donations, after consulting the rabbi, decided to place a pint of donated food at the door of the rich man during the Feast of Purim and not take it until the rich man in question had donated a large amount of money to the poor. Since then, this citizen of Marijampolė never forgot the poorer townspeople.