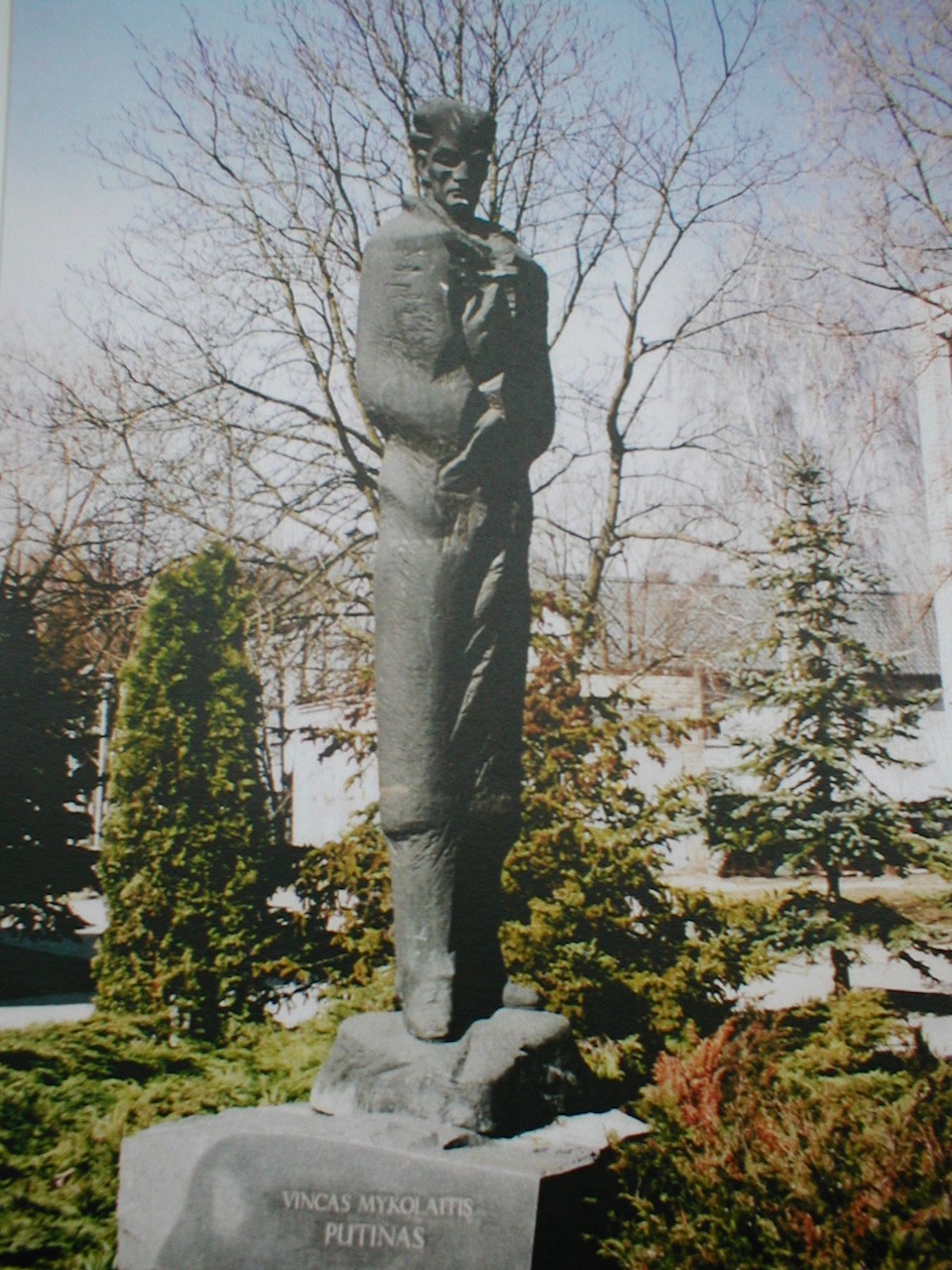 Vincas Mykolaitis-Putinas was a Lithuanian poet and prose writer, literary historian, philosopher and translator. Best known for his symbolist poems and novel “Altorių šešėly". The novel, which appeared in 1933, gained enormous popularity. “Altorių šešėly" is the first work in Lithuanian literature, which shows the beginning of the 20th century, the life of priests and the experiences of a young priest. In 1993, a monument to the classic of Lithuanian literature Vincas Mykolaitis-Putinas was unveiled. Sculptor Alfonsas Ambraziūnas, "...metal perpetuates the world of the writer's spirit and the legacy of creation". The project was prepared by architect Valentinas Medelis. 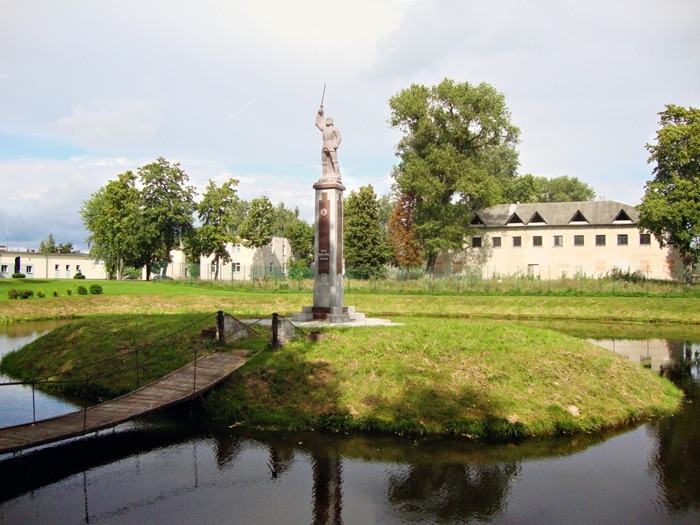 Sculptor Gabrielius Stanulis created a monument to Duke Vytenis in a military town in 1938. In the 1940s, when the Soviet occupation began, a division of Soviet paratroopers settled in the battalion, the monument was demolished and destroyed. The historical and cultural heritage of the General Support Logistics Battalion of the Grand Duke of Lithuania Vytenis was taken care of after 1993, when the Soviet army was withdrawn from Lithuania. The monument was restored in March 2009 by sculptor Julius Narušis in the same place – pond island.

Information will be available soon. 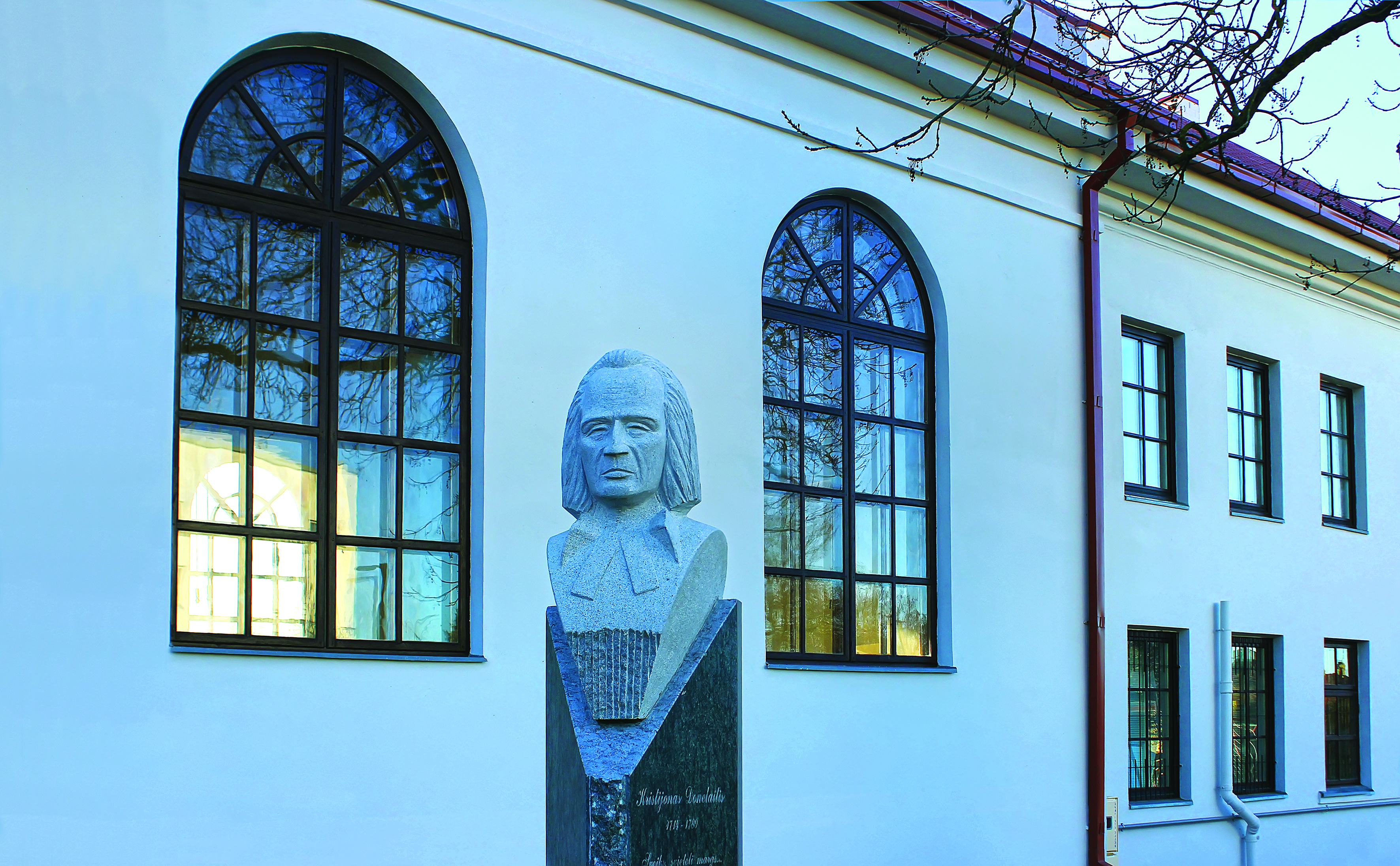 Kristijonas Donelaitis was an evangelical Lutheran priest and pioneer of Lithuanian fiction. To commemorate the 300th anniversary of the poet's birth, UNESCO added this anniversary to the list of 100 dates important to world culture, education, science and historical memory, and the poem “Metai" was recognized as a masterpiece of European literary heritage. The monument to K. Donelaitis at the Evangelical Lutheran Church was unveiled in 2013 to commemorate the 300th anniversary of the literary classic. 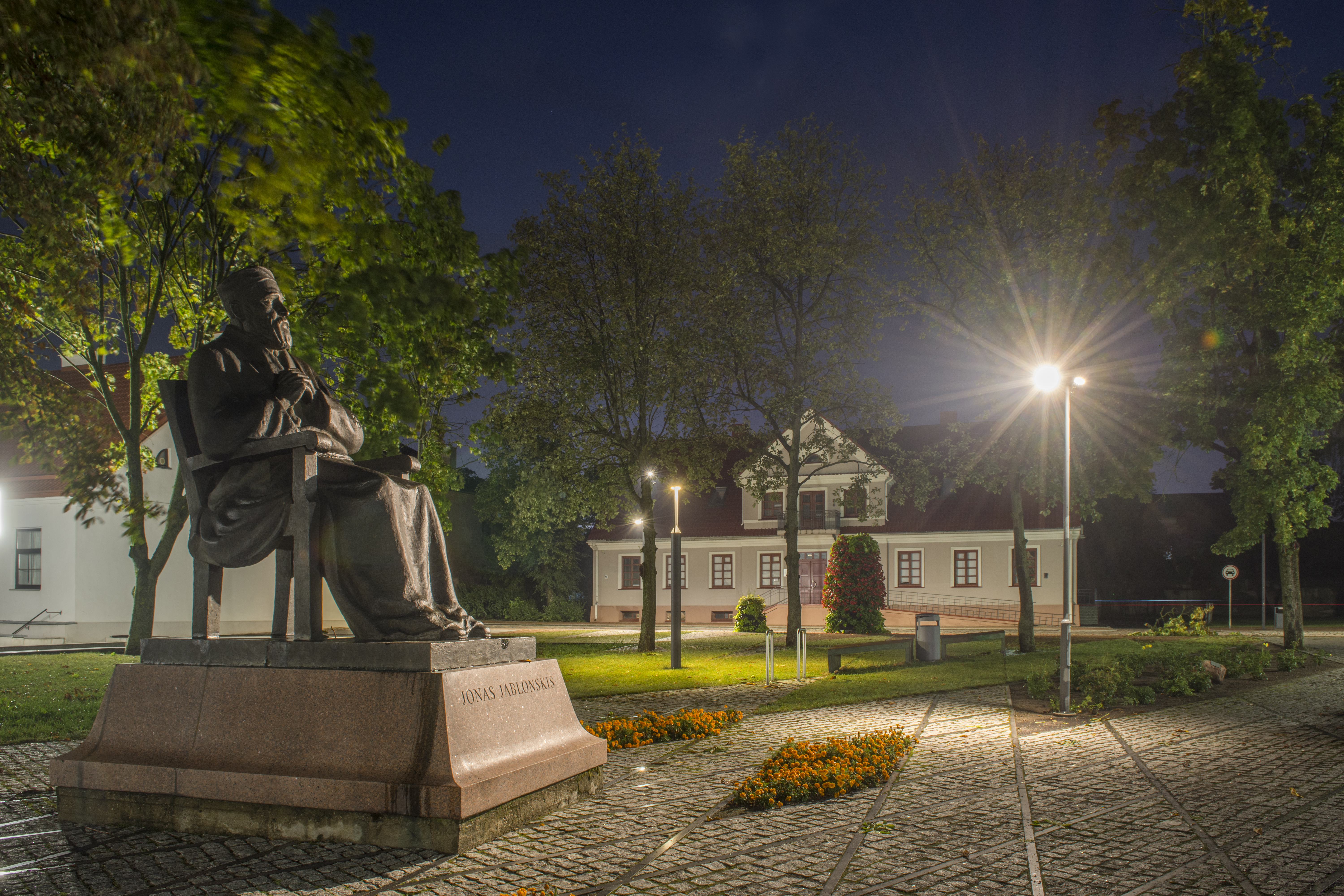 The gymnasium yard has a sculpture for Jonas Jablonskis. It is the same man who had a huge influence on this this school, that is the reason why the school was named after him. The sculpture was opened in 1992, the author of this work is – Petras Aleksnadravicius. Rygiskiu Jonas – one of the most popular nicknames, which reflects his native village Rygiskės, in the district of Šakiai. 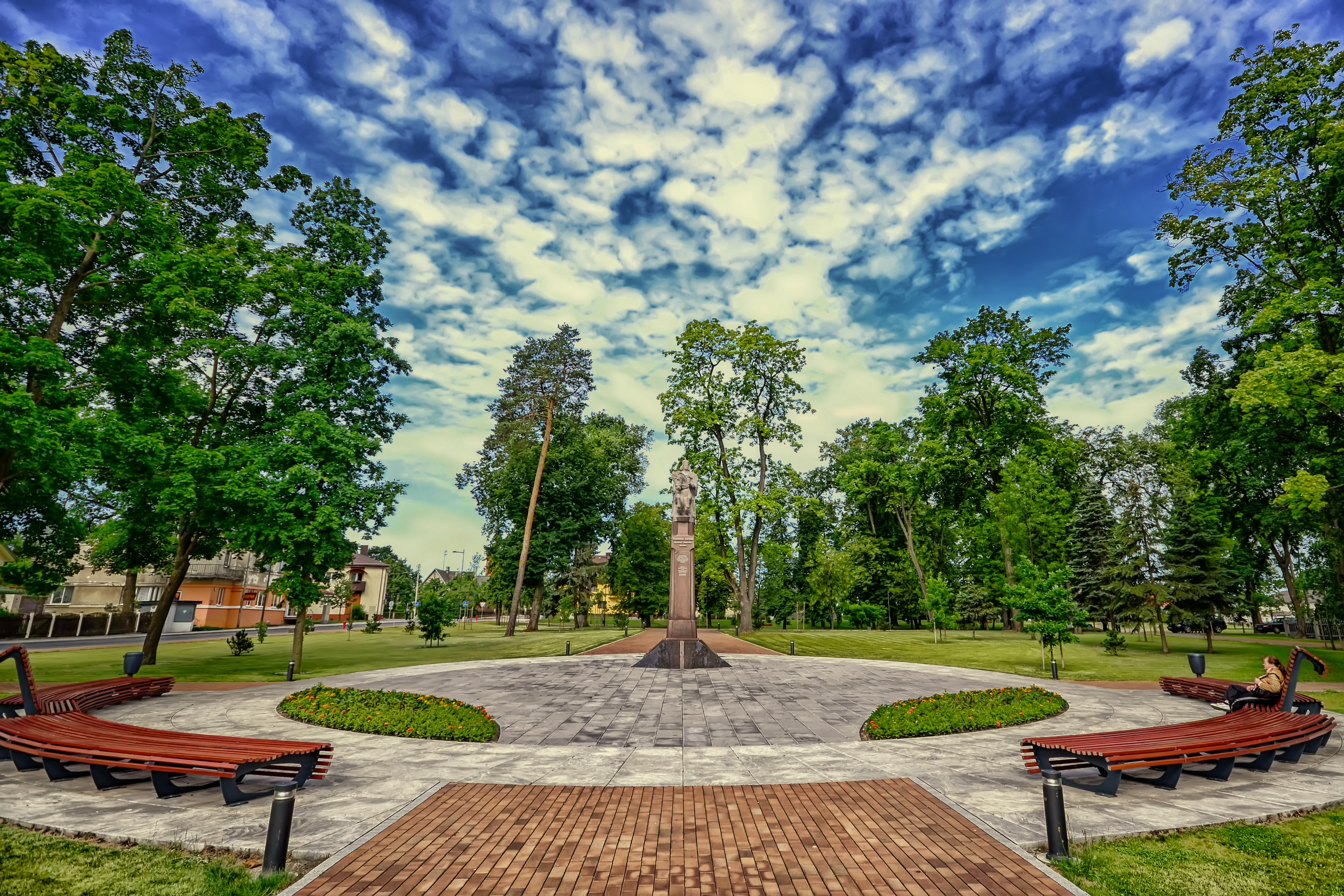 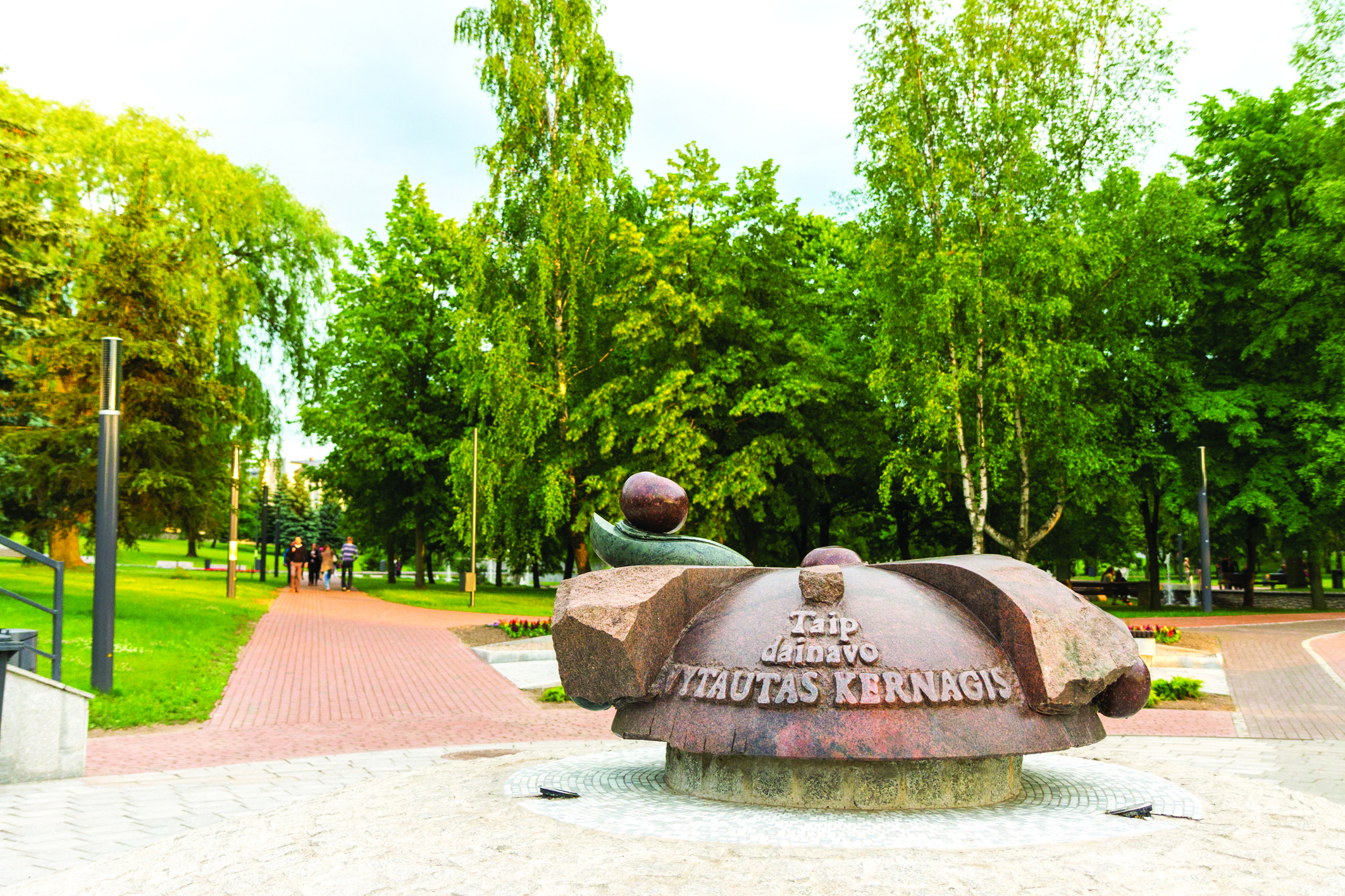 Memorial stone for immortal song of V. Kernagis “Kai sirpsta vyšnios Suvalkijoj...” (When cherries are mellowing in Sudovia…). The beauty is so enormous that may squeeze out the tears... 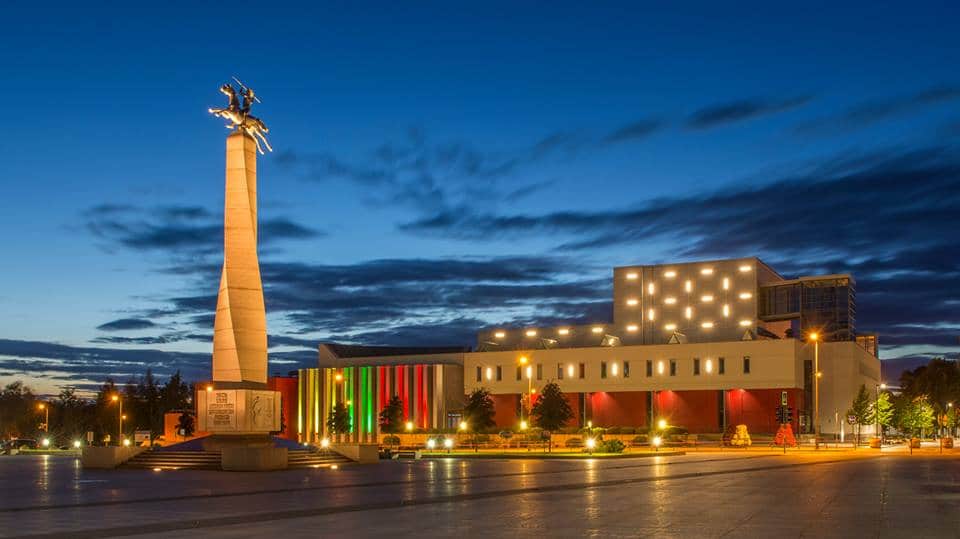 On 6 September 2009 at J. Basanavičius square a monument called Tribute to the Nation and Language was unveiled to commemorate the millennium of the name of Lithuania (1009– 2009). In the Interwar period an idea emerged to build a statue of Freedom in the central square of Marijampolė, but the idea failed to materialise. However, it was remembered as the millennium anniversary of the name of Lithuania drew closer. Sculptor Kęstutis Balčiūnas created a monument of pink granite and stainless steel, almost 20 metres in height and weighing 300 tonnes. The rectangle foundation of the monument is decorated with bas-reliefs: the first one is an inscription of the words ‘For the nation, for the language, for commemoration of the millennium of the name of Lithuania 1009–2009’; the second depicts a Krivis (priest) standing at an altar, an oak tree and a stone with runes; the third one is dedicated to Martynas Mažvydas and the first Lithuanian book; the fourth one shows father of our language Jonas Jablonskis and the words from the Postilla of Mikalojus Daukša. The four corners of the base symbolise the four regions of Lithuania. A rising spiral column signifies the hard road to the survival of the Lithuanian nation. At the top of the column is a shining silver rider on a horse. The horse is a symbol of the nation’s drive and its unstoppable movement forward. The rider is a free nation and the spear he is holding is a symbol of the nation’s word and endurance. 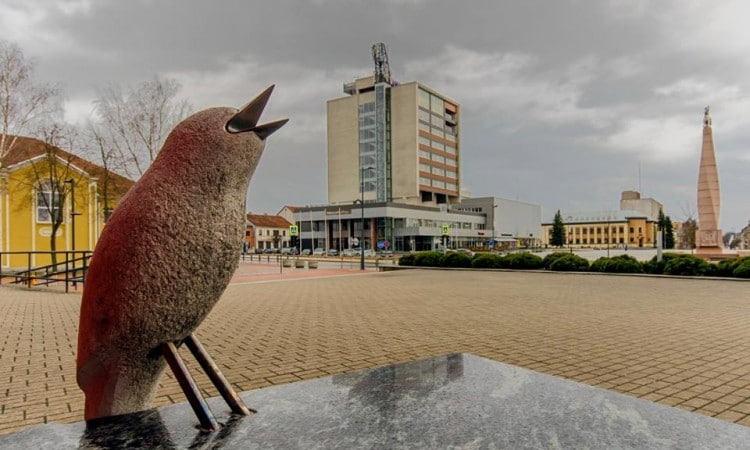 Also known as the Nightingale bench. On 8 September 2012, after the concert of world-famous singer Violeta Urmanavičiūtė-Urmana, her hometown unveiled a bench named after her. Sculptor Kęstutis Lanauskas. Violeta Urmanavičiūtė was born in 1961. She studied in the 2nd High School (currently Marijampolė R. Stankevičius Primary School). Later she attended piano classes of Professor Vlada Mikštaitė in Vilnius Conservatoire, then continued her education in a solo singing class. In 1991–1993 she studied in the Astrid Varnay master class of the Munich Higher School of Music, at the same time attending the Opera Study under the National Opera of Munich. As of 1993, she began her career as an opera soloist in Germany, Switzerland, France. She won several international awards, was invited for a debut in the Bayreuth Festival. The soloist sang on the stages of the best-known theatres in the world – in New York, Milan, Munich and elsewhere. Urmanavičiūtė sang under the direction of the most famous conductors of Lithuania and the world. Violeta Urmanavičiūtė-Urmana was awarded the Lithuanian National Prise for Culture and Arts. The singer was named a honorary citizen of the city of Marijampolė. 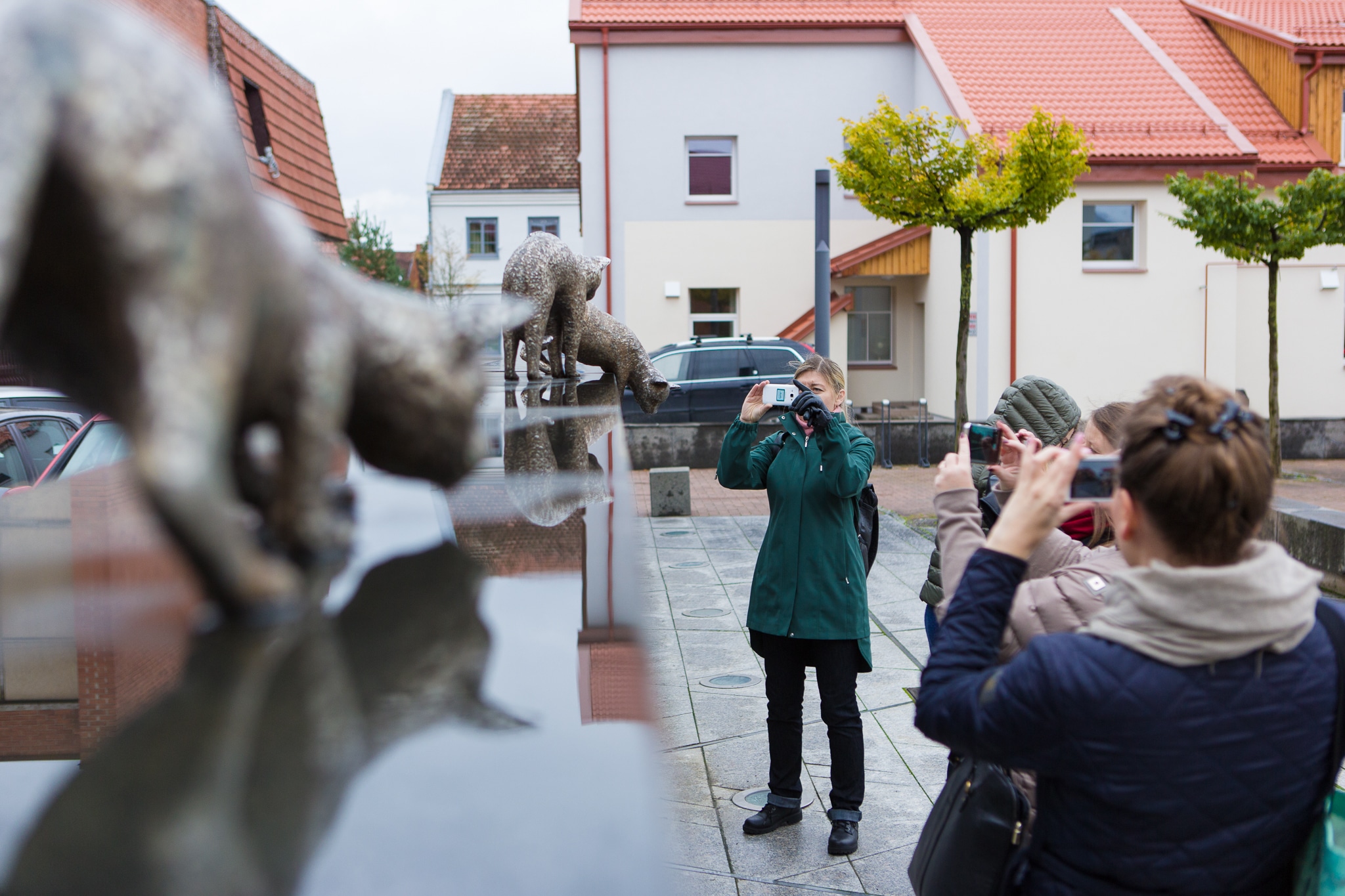 The predecessor of our city was Starapolė. It was founded by counts Markas Antonijus Butleris and Pranciška Butlerienė in 1739, and Marijampolė was founded nearby in 1750. Legend has it that countess Pranciška was very fond of cats, therefore, during the reconstruction of a small yard between the Kęstučio and P. Butlerienės streets, sculptor Kęstutis Balčiūnas erected there three cats playing in a water stream. Later the number of cats increased. After a while, visitors of Marijampolė noticed that, if you make a wish and pet the three cats, they grant your wish. But the cats are said to be as frugal as the people of this region so they do not grant financial wishes. Who knows, still worth a try.